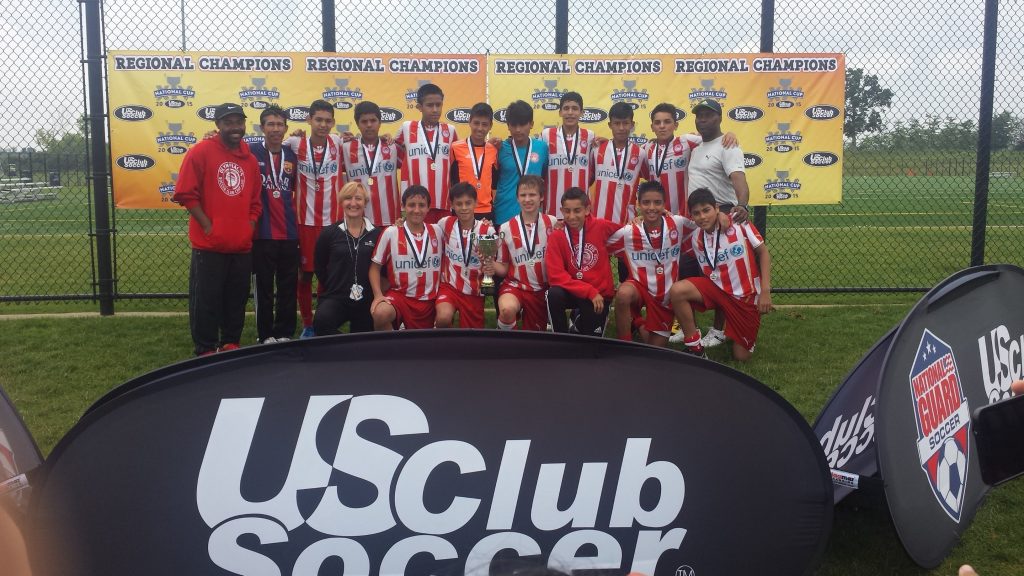 The US Club National Cup XIV Midwest Regional Championship concluded and Olympiacos Chicago had 4 teams competing against State champions and representatives from over 14 States in America’s Midwest Region.

Congratulations to the two Olympiacos Chicago City teams (U14 & U15) that advanced to the US Club National Cup XIV playoffs – both coached by Nelo Nightingale. Additional congratulations to coaches Kenneth Nightingale and Bert Badertscher and to the two U16 Olympiacos Chicago teams for making it to the Regional Championships. From over 1000 soccer clubs in the 14 states in the Midwest Region, only 2 other clubs had more teams than Olympiacos’ 4 teams in the Regional Championship in the U13 – U19 Super Group divisions.

The U15 team won  their bracket in the top Super Group division, winning all 3 games, and played in the semifinals against Chicago Inferno Elite. The U15 team played a great game, but lost in the penalty shoot-out, after overtime, 3-4. Congrats to U15 for a great season.

The U14 team won  their bracket in the top Super Group division and played in the semifinals against San Antonio SC, the NISL Premiership 1 League Champions, and won 5-2. The U14 then played the Minnesota Twin Stars Academy, the Minnesota State Champions, in the finals , and won a hard-fought game in overtime  3-2. The U14 Olympiacos team is now the US Club NISL Prem1 State Champion and  the US Club Midwest Regional Champion. The U14 team will now be representing ALL the Midwest teams, playing in the US Club National Cup Championship Finals in 3 weeks, July 17-20, at Grand Park in Westfield Indiana, the largest  soccer/sports facility in America, just outside of Indianapolis, Indiana. The 5 winners of the US Club Regions (Midwest, West, Northwest, Mid-Atlantic and Southeast) will play 4 days to be crowned the US Club National Champion. CONGRATULATIONS TO COACH NELO NIGHTINGALE AND THE TEAM!

Thank you to all the Olympiacos coaches, team managers, and parents in supporting our GREAT Olympiacos Chicago players and teams at the US Club National Cup XIV Midwest Regionals!