Olympiacos Chicago Welcomes Olympiacos California to the Network of Academies in the USA!

Olympiacos Chicago Welcomes Olympiacos California to the Network of Academies in the USA! 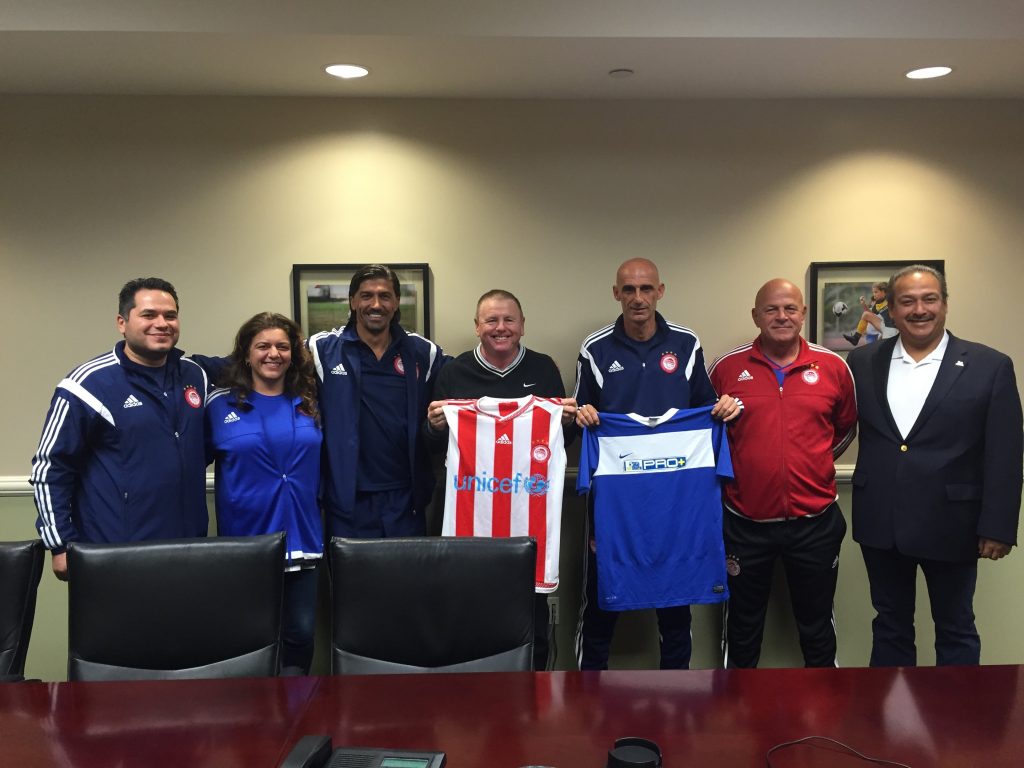 The visit of the Academy of Olympiacos in Los Angeles, USA between November 9-16 was highly successful. The staff of our Academy visited the city’s School of Football operated by Olympiacos and talked with local bodies, local clubs and fan clubs.

The Director of the Network of Schools, Mr. Vasilis Nanos, the Scout and Veteran Player of the Club, Mr. Giorgos Amanatidis,  and the Coach of the Academy, Mr. Fotis Papanagis, visited the “City of Angels”. The Olympiacos delegation was warmly welcomed by the head of the California School, Mr. Kostas Frousiakis, and his brothers Yiorgos and Yannis.  The Chicago School was represented by Olympiacos Chicago Director of Communications and Public Relations, Mrs. Angela Kosmas!

The people of Olympiacos also visited the offices of the Association for Youth and Adult Soccer in Southern California. The football association in Southern California numbers 170,000 footballers, 34,000 coaches, referees and volunteers, and over 12,000 football clubs. There was a meeting with the President of the Association, Mr. Derek Barraza, Mr Johnnie W. Garza, Jr. Chief Executive Officer, and Mr. Steven Hoffman – Director of Coaching Education and Player Development. During the conversation, there was exchange of information regarding the mode of operation of Olympiacos and the Schools in the States, whereas the topic of an official collaboration between the Association and our School is under consideration. Additionally, the representative of the Chicago School, Mrs. Angela Kosmas, analyzed the plan of operation and the means of development. The President said that the selection of the area for an Olympiacos School is very apt given the demographics.

During the visit, there was also a meeting with LA Galaxy representatives. The meeting was with the former player of the club Mr. Pete Vagenas – Senior Director Youth Academy and Alumni Relations, the Director of Football, Mr. Jovan Kirovski, Mr. Gordon Kljestan, Director – Amateur Soccer and Fan Development and the Academy Director,  Mr. William Bizzaro. During the meeting, there was a tour in all areas of the stadium, the offices, the locker room, the gym, the restaurants and inside the stadium. The facilities of the club host all United States National Teams and there is also a school for the children of the academy. There was an exchange of team memorabilia and the mode of operation was discussed!

The Olympiacos School has been scheduling this visit of the staff of the Academy for a long time and had of course arranged for a reception in their honor. The reception was held in a local golf club and all children of the Academy together with their parents were present, as well as many Greeks living in Los Angeles.

A video featuring Roberto sending his wishes was played during the event; Roberto donated his shirt and his gloves and Pulido donated his shirt. It is noteworthy that many children from Mexico train in the School and Pulido was the player that sparked their interest! Mr.  Amanatidis also donated a shirt from when he was playing for Olympiacos and the money collected during the event were donated to an organization for children with special needs using therapeutic horseback riding for their treatment.

The Chicago School was represented by Mrs.  Angela Kosmas who presented a plaque to Mr Frousiakis as a welcome to the family of Schools and promised that they will soon visit the School to play some friendly matches. Mr. Frousiakis presented Olympiacos with a plaque and said that we all form a big and strong family! The three representatives of Olympiacos also talked during the event, whereas little Alton won a trip to Greece to attend together with his parents the match against Arsenal!

Olympiacos Chicago welcomes Olympiacos California to the Olympiacos Family and wishes them the best in all future endeavors!