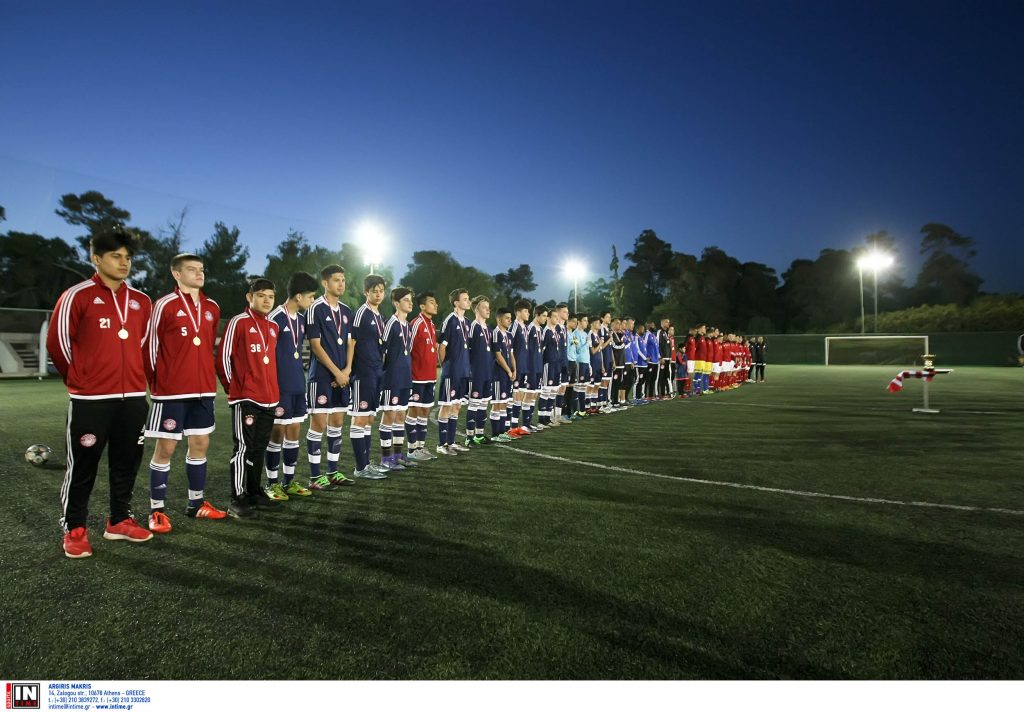 A friendly match of international specifications between the Chicago School and Tavros School was held Thursday evening, March 31, 2016 at the “Star Club Facilities” in Voula, Greece.

The Secretary General of the Association of Veteran Players of Olympiacos and “soul” of the Voula school, Mr. Antonis Glikas, along with his colleagues opened the gates to the center and honored our school who crossed the Atlantic to come to Greece!

Before this important match between our two schools, the Olympiacos anthem played on loudspeakers and was followed by speeches and awards. Welcoming the kids to the ground  Mr. Glikas stated: “The Olympiacos family is united here tonight. Thank you to our President Vaggelis Marinakis who has a vision for all of the young children as we are here to celebrate our Olympiacos. He deserves many bravos. I want to also congratulate the CEO of Thrylos AE Mr. Georgios Pavlou who has embraced us and the Director of Schools Mr. Vasilis Nanos who is by our side daily. Long live Olympiacos. We are honored that you traveled from Chicago and are here with us.”

The head of the Chicago school, Mr. Yiannis Kosmas from his side stated: “Olympiacos unites us. Olympiacos brought us here and without this big club these kids would not have been able to travel to Greece. We would like to thank you for your hospitality. We are proud to be part of this large family.”

The head of the Tauros School Mr. Fotis Keramidas noted: “You may be far away from us but you are part of the Olympiacos family and that makes us feel as if you are actually close by.”

Subsequently the President of “Star Club” and former player of Olympiacos Mr. Sotiris Georgoudakis honored the Chicago school by giving a trophy to the Head of Coaching Mr. Nikos Mirtsekis and Mr. Antonis Glikas handed a trophy from IEK Xini to the captain of the school. Mr. Yiannis Kosmas honored them as well and the School of Voula for hosting the match at their facilities.

Mr. Fotis Keramidas also gave a commemorative photo of the Tavros school to the Chicago school.

The players and coaches of the Chicago school received medals from Mr. Glikas, Mr. Gaitatzis, and Mr. Georgoudakis. The national anthems of both the USA and Greece were heard on the loudspeakers and entered the stadium shortly thereafter to “do battle” after the whistle of the referee sounded.

Both teams enjoyed the game that riveted all who were at the center and did not believe that a team from Chicago traveled to Greece for friendly games. For the record, although the Tavros School went ahead in the score 1-0 in only seconds into the match, the Chicago School eventually won 3-2! For the Chicago School scorers were Edgar Cardenas (2) Joel Sanchez and for the Tavors School Chaleplian.

Doctor of the match was Mr. Kreouzos while valuable was the help of members of the Association of Veterans Mr. Theodorou and Mr.  Toulgeroglou. After the completion of the great match the Tavrus and Chicago Schools particularly thanked Mr. Glikas and Mr. Georgoudakis for the excellent organization and of course the hospitality.