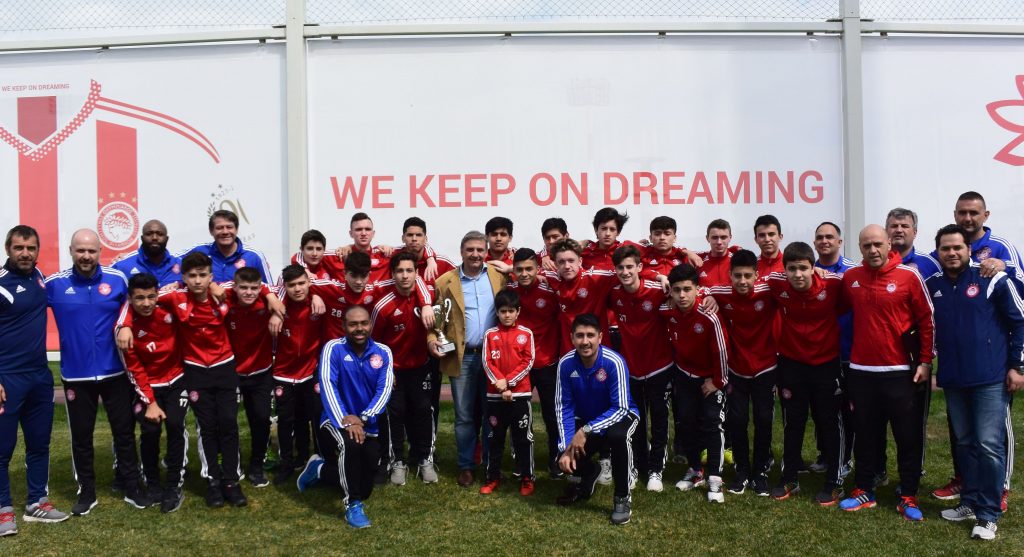 In a simple but moving ceremony that took place at noon on Tuesday March 29, 2016 at the Renti Training Center, Olympiacos Soccer School Chicago honored Olympiacos FC for the honor they have given the school to represent such a high caliber European Champions League club in the United States.

Assistant coaches Yohance Moore & Kenneth Nightingale that won with the U14 Red City team the US National Cup Title in 2015 handed over to Mr. Pavlou the trophy in order to be housed at the Olympiacos FC Renti Training Center Facility.  Mr. Pavlou said: “We are very happy that you are here in Greece.  You are making us proud in the US. I hope you have fun here and make your stay unforgettable through this experience. I also wish you good progress with your studies as it is very important for all children to do well at school.”

Director of Coaching Mr. Niko Mirtsekis presented a commemorative plaque to Mr. Grigoris Georgatos for his contribution to Greek football and Olympiacos FC.  Mr. Georgatos said: “You may be far away from Greece but we monitor your actions. We are honored that you represent us in the US and that you want to constantly become better. What I want to say to the children is that they should be enjoying training and their experiences with football. This is the most important thing. Becoming a professional footballer is something different but the joy for the sport should always remain. I hope in the future that a footballer from our School in Chicago come and stays with the Resident Academy and why not become a professional footballer. We all want that. Listen to your coaches. I see here a player, Nikos Mirtsekis, whom I have met many times on the field as an opponent and I must say he was very difficult to defend against. Now he is your coach you should listen to him. I wish you health and good performances in football and in school.”

Three players that were part of the National Cup Title team, Sebastian Contreras, Leonard Haro and Zach Bargas presented Mr. Eleftheriadis an autographed jersey of all the players. Mr > Eleftheriadis wished the players to continue to work hard and make proud every Olympiacos player and supporter.

Tam Captain Ismael Contreras presented a commemorative plaque to Mr. Vasilis Nanos while stressing the importance of the Olympiacos family and its success in the School in Chicago.

The Head of School Mr. Kosmas gave gifts to all children of the Academy and said that he was very excited by the event: “We are proud to be part of the Olympiacos family. A family that has its reaches everywhere. Thank you for your love and hospitality.”