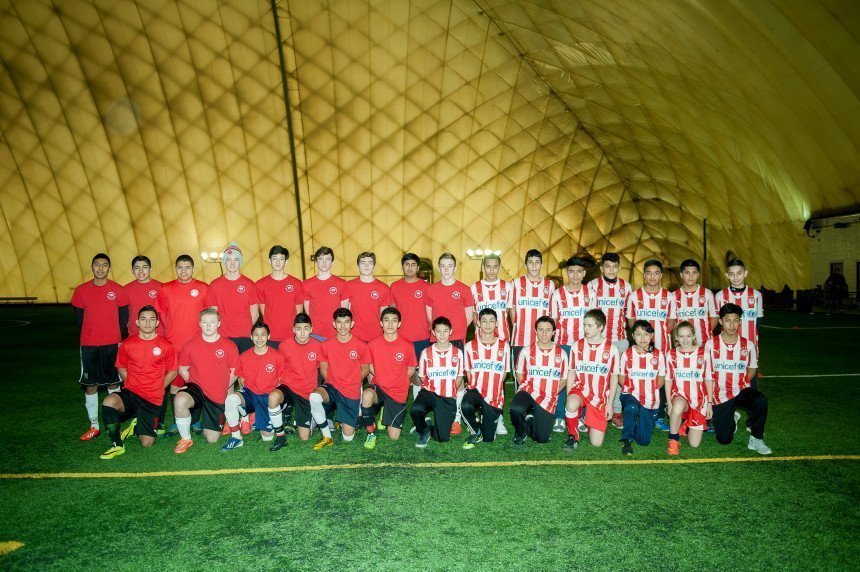 CHICAGO – A professional Greek club, Olympiacos, a regular participant in the European Champions League, has always nurtured players from diverse backgrounds – in Chicago, a subsidiary of the club, is no exception – with its 20 teams in the Midwest, there are countless players with Latin blood.

“Hispanics know football, and know European football. So when they hear the name Olympiacos, they know well what we are talking about because they follow the Champions League and other championships”, said John Kosmas, director of operations of the Club, who also explained why many Hispanics have arrived at the club recently. “Here the kids have many options, like other big clubs like Magic, Sockers and Chicago Fire, but chose Olympiacos because we are a subsidiary of a European club, with their player development and training system”.

Olympiacos is one of the two biggest clubs in Greece (the other is the Panathinaikos), and in recent years, its economic power is clearly located at the top in the country, with 16 consecutive appearances in the Champions League in the past 17 editions. Past famous figures, like Brazilian Rivaldo and Giovanni, the French Christian Karembe and Serbian Predrag Djordjevic, among others have played in Olympiacos FC.

The club has 39 schools in the country, Greece, one in Australia, where there is a large Greek community, and one in Chicago, which was created three years ago.  Basically, it first started out with American children of Greek origin, but quickly expanded to the current 20 teams with players from 3-17 years in four areas: Naperville, Park Ridge, Hinsdale and Chicago. The club competes in several local leagues, from a high competitive league as NISL (Northern Illinois Soccer League) to the least competitive divisions learning the basics of football.

Olympiacos Chicago uses the same training program including videos and curriculum sent by the club from Greece. Last summer, when the professional club came from Europe to face Liverpool in Soldier Field, the local children ‘lived the dream’ with European stars and observed practices in UIC, which were closed to the public.

In the last two seasons, Olympiacos Chicago has raised its actions with input from some technical experts, such as as Moses Alarcón, who led the Chicago Magic teams internationally, and even added several players coming from the same Chicago Magic and other travel teams (highly competitive) locally.

One of these players is Matthew ‘El Tigre’ Bahena, who played for the Magic to the orders of known professionals as the Salvadoran Raul Diaz Arce, former striker of the MLS and the national team. Ruben Morales Jr. is another player who trained with the Magic, and is now in the Greek club. Both feed on dreams to become professionals – Morales “in Mexican club Chivas as Leones Negros or”  Bahena “in the Chicago Fire, LA Galaxy or Pumas of Mexico”.

As is common in this globalized world, Bahena and Morales do not rule out a future in European football.

“It would be most desirable to play there,” admitted ‘El Tigre’ Bahena.

The person who will be tested in European football is the young Misael Rodriguez, 11, who will travel in a few months to train in Athens, Greece with Olympiacos youth. If he convinces local coaches, Rodriguez could stay on European soil and make the team. “Finally we have convinced them (the Greek leaders) that, here in America, there is talent because we have players of different nationalities and different backgrounds. They are realizing that the world is not only Greece,” said Kosmas.

Rodriguez coached by a group of experts led by Niko Mirtsekis, director of club coaches, who played for years in the Greek national team and Champions League.

The arrival of large numbers of Hispanic players to the local Olympiacos has several causes. For one, both parents and children value the training system, copying the European Olympiacos. On the other hand, the local subsidiary has better equipment than other high performance local schools and children receive a preferential treatment.

“We have been with the club for a short time of eight months, and it has given us good facilities for training and we are happy,” said Eduardo Hernández, whose son (of the same name) plays in the U14 team in town. “Before my son played in the Chicago Magic, but the whole team, about 18 children, we came to play here with the same coach Nelo Nightingale” said Juan Guzman, father of Juan Jr., plays right side and midfield in the Under 14.

Rubén Morales, father of Reuben Jr., Under 16 player in Hinsdale, said, “this is something different from what we have been seeing for the training they are giving the boys and they give them ideas for good preparation for college. “Ruben Jr. is preparing in Olympiacos to go to train in the summer with the Under 17 team of Club Universidad de Guadalajara in Mexico, where his uncle Victor Rodriguez was a player for many years.

“Here, the Latin American youth are giving strength to these European clubs,” said Morales’ father. His son Reuben is one of 250 young footballers who expect Olympiacos to prepare him for a future career.